This link will take you to my author page on Amazon with a listing of all my books. 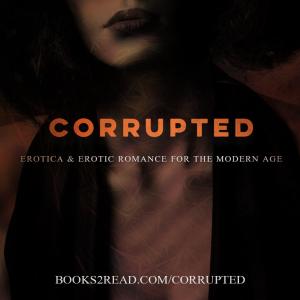 From the publisher, Sexy Little Pages, the anthology Corrupted is available for your Kindle, Nook and other ereader devices. By clicking the picture, you’ll be able to purchase a copy. My short story in the anthology is called, Ghosting Past Emily.

Emiya Muraoka (Emily to colleagues) gripped the armrest of the business class seat, as the 787 quivered like a nervous greyhound at the end of Haneda International’s Runway 4. Her seatmate gave a smile likely meant to reassure—which she ignored—when the twin-engines roared to takeoff RPM, and the heavy aluminum cylinder trundled down the bumpy concrete.
Her stare fixated on the blank video seatback screen as she discreetly pressed the wireless control clenched in her slick fist. The earplugs dampened the noise, but not the vibrations that caused her to breathe out in trembling gasps timed to her racing heart.
Having an orgasm as the plane sundered tight bonds with Earth was the only way she coped with the fear of falling and the sickening lurch of half-G. The egg inside her vagina buzzed at its highest setting, the clitoral stem stroked faster than the most accomplished tongue.

Now available from Amazon for your ereader,The Case of the Disciplined Valentine, can be purchased at this link here.

It is 1854 in steampunk London, and Sir Nachton MacRath is warily returning to his home isle after decades abroad. He has good reasons to steer clear of the Royal Family, but is immediately snared by the Queen herself, who anoints him, Her Chastiser of Loose Morals, complete with elevation to the upper reaches of the aristocracy. Rather than a quiet existence as a vampire, he is now a Peer uneasily rubbing shoulders with the most powerful men in the Empire.

Phoebe Hayward is a lady of good breeding, but like all her contemporaries, longs for some excitement and romance. Valentine’s Day is only weeks away, when their paths cross with a bump. Despite later discovering the man ordered to discipline her is actually a vampire, she can’t help falling in love. The more encounters with Sir MacRath she has, the more her body yearns to know what it is to submit to his vampiric touch. When he reluctantly agrees to be her Valentine, thus begins a Domination and discipline the likes of which she’s never dreamed.

MacRath doesn’t feel he deserves Phoebe’s love, and attempts to push her away by taking her deeper into sexual submission. She surprises him — and herself — by eagerly submitting to his every desire. Together, they explore the sensual heights that a woman and a man — a vampire — can reach. But politics and conflict are never far away, and the Valentine’s Day deadline comes all too soon.

Note: The original version of this book was included in the Lust in Lace paranormal romance anthology.

When Stephanie crashes (quite literally) into the life of Ross, high flying exec in the fashion world and eligible bachelor, she is stupefied he wants her as his. Under Ross’ tutelage, as Brat to his Sir, she learns that she can be spanked for more than just being naughty! And Ross — he discovers there’s much more to Stephanie than just her submissive need to be disciplined, as he falls more and more in love. A brilliantly funny, light-hearted, spanking erotic romance novella by Byron Cane, with memorable characters and a beautiful love story interwoven into the sexiness, lending a contemporary twist to the princess fairy tale.

Available for your ereader or as an audio book.

In Byron Cane’s, The Witch of Olympus Hollow, it’s 1952, and Gale Johnson is outraged when her parents send her packing to a tiny town in Appalachia to visit the mysterious great aunt she has never met. In the foothills of North Carolina, Gale will discover a wondrous birthright. A lifetime of discipline and sexual satisfaction awaits, but her destiny comes at a cost.

To read more about The Witch of Olympus Hollow, click here for Spanking Newsletter #2.

Available for your ereader or as an audio book.

In Byron Cane’s Sir MacRath Thrashes his Valentine, MacRath is a centuries-old vampire returning home after decades of absence. It is 1854 in steampunk London, and Her Majesty has appointed MacRath Her Chastiser of Loose Morals. Phoebe Hayward is a lady of good breeding, but quite a handful. Despite discovering the man ordered to discipline her is actually a vampire, she can’t help falling in love. MacRath will ensure she is well punished and dominated in all ways as befits his naughty Valentine.